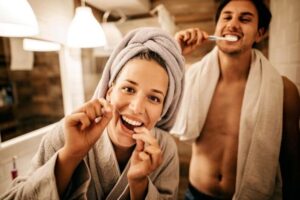 How to Floss Correctly and What Tools to Use

It’s an integral part of oral hygiene, but a lot of people don’t know how to floss correctly. Those that do oftentimes just don’t floss daily because, let’s be honest, it can be inconvenient.

Unless you want to end up dealing with a lot of cavities and potentially losing teeth, you need to start making flossing part of your daily routine.

Why Flossing is Important

One study found only about 30% of Americans floss their teeth daily. That could be one of the reasons why tooth decay is the most common ailment in the country. You can save yourself from joining the vast number of people dealing with tooth decay just by taking an extra few minutes every day to floss.

Here’s why it’s so important. Throughout the day, you get food particles and other things stuck on and in between your teeth. When you don’t get rid of those particles, bacteria will attack them and turn into a sticky substance called plaque. The acid in the plaque will eventually eat into your tooth and can destroy it if left untreated.

When you brush, you get rid of all the plaque on the easily accessible surfaces of your teeth. The problem is your brush can’t get out everything that’s in between your teeth. That’s where flossing comes in. Running floss correctly in between all your teeth will dislodge any particles that were stuck.

Flossing also helps keep your gums healthy. That helps prevent gum disease. Gum disease leads to the breakdown of soft tissue in your mouth and can destroy the bone that supports your teeth. If that happens, your teeth can become loose or even fall out entirely.

Gum disease has also been linked to cancer and even heart disease, which further underscores the importance of daily flossing.

So now you know why you SHOULD floss. Now you’re probably wondering how to floss correctly. It’s pretty simple.

Here are the 5 steps to get it done, according to the ADA:

You’ll repeat those steps for each tooth. Make sure to use a different portion of your long strand of floss in each gap. Using the same section will only spread the bacteria that the floss is removing. And don’t forget to do the back of the teeth that are in the back of your mouth (the ones that don’t have another tooth behind them).

If you have braces, you’ll use pretty much the same method. The biggest difference is going to be at the beginning. Instead of just sliding the floss from the top of the teeth downward, you’ll first have to thread the floss underneath the wire of the braces. At that point, you can use steps two through five to get the job done.

You will want to use waxed floss or some other product designed to clean around braces. Unwaxed floss will make it more likely to shred and get stuck in your braces.

The Tools of the Trade

While the best tool to clean between your teeth is traditional floss, it’s not your only option. The best option FOR YOU is going to be the one that you will actually use. Here’s the case for the most common ways to get the job done.

These days, floss is usually made from nylon or other plastic filaments. It’s cheap to buy, and it’s extremely effective.

The good thing about traditional floss is it doesn’t spread bacteria throughout your mouth when you’re flossing correctly. Since you change the section you’re using for each gap, the bacteria is staying on the floss and not being rubbed into the next set of teeth.

The downside to traditional floss is it’s the most inconvenient method. It takes a little longer because you are constantly adjusting the strand, and it can get uncomfortable trying to fit your fingers at the angle you need to get into all the necessary spaces.

Using a floss pick is a great alternative to traditional floss. Since the strand of floss is on a pick, you can reach further back into your mouth much more easily. It’s also easier to get the floss in between your teeth.

The tradeoff here is that you’re using the same small piece of floss for your whole mouth. That’s spreading bacteria from one spot in your mouth to every other area. Now there could be bacteria in a spot where it wasn’t before you put it there.

One way to mitigate that is to use a different pick for each quadrant of your mouth. You will use four picks to get your whole mouth done, but then there isn’t as high of a possibility of spreading bacteria.

A water flosser, also known as a dental water jet or oral irrigator, shoots a stream of water in between your teeth to clean those hard-to-reach spaces instead of running floss through them. They make the process much easier to do than floss, especially for people who wear braces or have arthritis. An added benefit is they can help keep your breath fresh for a longer period of time.

Water flossers aren’t without their downsides, though. You’re going to pay quite a bit more to get ahold of one as opposed to just buying some form of floss. It’s also going to be a lot messier than just flossing. Even though there’s an added mess, it’s still not as effective. The stream of water doesn’t always remove all the plaque like physically running a piece of floss over your teeth would.

The Most Important Part

Daily flossing is going to keep your teeth looking fresh and sparkly. You’ll get the immediate benefits of removing any buildup from the day and fight off future damage by preventing tooth decay and gum disease.

Pick whatever method works best for you. The most important thing is that you’re doing it every day. And don’t miss your regular cleanings at the dentist.